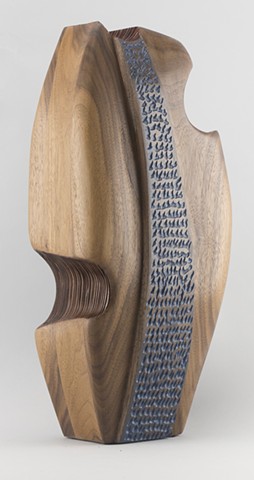 RESUME: *Current: Full time designer and maker of abstract wood sculpture. *Retired from Duke University (2010) where he was a Professor of Radiation Oncology *Prior positions include: Chair of the Radiation Oncology Department, The University of Arizona; Faculty member, Harvard University; Chair of Radiation Oncology, Health Care International, Glasgow, Scotland *Research Physicist, Wesleyan University Selected Professional Achievements: *Listed in “Best Physicians in America” and “Best Doctors in North Carolina” for many years. *Elected to Fellowship in the American College of Radiology and the American Society for Radiation Oncology *Elected to Phi Beta Kappa, Alpha Omega Alpha,Sigma Pi Sigma, and Sigma Xi Honor Societies *Over 120 publications and book chapters; 2 patents Education: * M.D., The University of Arizona *Ph.D., Physics, The Johns Hopkins University, *B. A. Mathematics and Physics, St. Olaf College BIO: James Oleson has taken many art courses in drawing and oil painting through the years, and since 1980 he has focused on designing and making furniture as his art medium until recently transitioning to making abstract wood sculpture. In recent years he attended workshops relating to furniture design and making with Rosanne Somerson (Anderson Ranch), Teri Masaschi (Center for Furniture Craftsmanship), Jeff Jewitt (Marc Adams School of Woodworking), Michael Fortune (Anderson Ranch), Paul Schurch (Marc Adams School of Woodworking), and Brent Skidmore (Haystack Craft School). In 2019 he atternded a workshop on power carving taught by Betty Scarpino ( Anderson Ranch). An image of his mesquite buffet was published by Lark Press in “500 Cabinets”. An image of one of his tables appeared on the cover of the January 2013 issue of the “International Journal of Radiation Oncology Biology Physics”. An image of his “Bristlecone Pine Marquetry Cabinet” was published in the book “Rooted – Contemporary Studio Furniture” by Schiffer Books for The Furniture Society 2015. His work is shown at the Frank Gallery, Cocoon Gallery, and NC Crafts Gallery . ARTIST STATEMENT: I have been making furniture for about 35 years and, more recently, wood sculpture. One of my first hardwood projects was a cherry blanket chest for my daughter that had nearly 100 dovetail joints that I cut with hand tools! The early projects were utilitarian but as I continued to design and make furniture my vision began to change and I imagined objects as composed of related shapes, lines, and curves in three dimensions –sculptural objects that embodied aesthetic ideas. sculpture. Now I am in transition from making functional objects to making non-functional, small scale, abstract sculptural objects. I found that making functional furniture had become less challenging as I mastered furniture making techniques, and my interest shifted more to forms themselves.This interest in making small scale wood sculptural objects was reinforced by the need to have less physically challenging work as I aged. Lumber is heavy and many repetitive actions are needed to machine the wood. Furniture is also heavy to move! I have recently moved to Carolina Meadows and I do have a shop, albeit a much smaller space than I have had for many years. Hence the appeal of making smaller scale objects. I did wish to continue using wood as a medium because I am very familiar with the properties of wood.For many people, the transition from making functional furniture to making abstract sculpture might be effortless. For me, this has been very difficult. I could visualize shapes but lacked the appropriate tools for creating these shapes. I did a lot of experimentation with additive and subtractive techniques but finally realized that I needed specialized power carving tools to achieve what I visualized. In August 2018 I went to a workshop at the Haystack School of Crafts on Deer Isle off the coast of Maine. Brent Skidmore was the instructor. Brent’s studio is in Asheville, NC, next to the Grove Gallery. Brent makes objects that may or may not be functional but typically involve carving shapes like rocks, adding surface texture and acrylic color, then assembling these objects into larger creations, many of which ultimately incorporate function – such as a coffee table with a glass top supported by the sculptural forms. I thought this workshop would offer me experience using power carving tools, and, indeed, it was the perfect workshop in content and timing. This year I attended a workshop on power carving at Anderson Ranch taught by Betty Scarpino. My interest in sculpture has been influenced by the work of several artists: Michael Puryear, Barbara Hepworth, Isamu Nogucci, Constantin Brancusi, and Wendell Castle. Some other comments about my artistic interests: My inspiration for abstract designs is primarily from nature where many curved shapes arise from differential growth and are described by relatively simple mathematical formulae. This appeals to my background in mathematics. To develop a new vocabulary of abstract forms I feel a need to re-program my brain. There is a discipline required to channel and focus on new forms and scale. What am I trying to express? I explore the relationship between inside and outside surfaces, the concept of inner spaces, the creation of “active” shapes that lead the eye, and the balance between overall shape and details. Mostly, I enjoy the PROCESS of making: the hand-eye coordination, the physical activity required, the satisfaction in being able to view the completed project. Little of this process may be evident to the viewer: the art object must be judged on its own aesthetic merits.